Day two found me in Rockwall TX visiting the Hullett’s Life is Good store. Jamie was conspicuously missing but I had a great visit with her dad and brother. After being offered a caddie discount I couldn’t refuse, a Genuine Jake t-shirt is now part of my ensemble.

No Nabisco For me

No bag for the Nabisco so I’m meandering back East. I could have gone and worked the pro-am but it would not have made financial sense.

Last night, Kevin and Kim took me to dinner at their favorite Thai restaurant. I had no idea what to order but a recent episode of Man v. Food struck a chord. The dude was slurping down a huge bowl of some kind of noodle soup chocked full of goodies and I was hoping something similar was on the menu. Kevin said the #19 wood fit the bill and did it ever! A large bowl of noodle soup containing pork, shrimp and stuffed wonton. Wow! I literally could eat that everyday and not get bored.

Plenty of laughter accompanied our feast once I started reminiscing of days gone bye. It became apparent that this is where I was meant to be. So, I wish to thank the nepotistic a-holes at American Greetings -who passed me over for a programming position- and opened a path to the LPGA Tour. Just can’t imagine being stuck in a cubicle writing code after what I have experienced out here.

I left early this morning and was met with another day of  unsettled windy weather. Luckily, it was at my back which improved the gas mileage by a couple mpg. Made it all the way to El Paso on one tank. Speaking of El Paso, you know when you arrive -coming from the West- by the stench of the stockyards that boarder I-10 on the city’s outskirts. Whew! The pungent aroma of cow crap is not exactly the same as a vanilla bean deodorizing strip hanging from the rear view mirror.

Bed down at Big Springs TX for the night. Just a zillion more miles to go but plenty of time to do it in.

Another trip out for lunch and touching base with my fellow loopers was all she wrote.

Earning my keep: Even though I’m not working the tournament, it doesn’t mean I’m sitting on my butt at Kevin and Kim’s place. One thing I’m fairly adept at is computer stuff and it came in handy this week. Added memory to a desktop, created a home network, installed security software, locked down their wireless router and moved files form a third machine to consolidate the workload kept me busy. The final step is setting up an offline backup account so their data may be recovered just in case. Getting back to the router, just because you have it configured for password access doesn’t mean it’s totally secure. Make sure you change the router’s default login password and SSID. Otherwise, it can be hacked. Check the user manual on how to do it.

Fading glory: Gary Lukash (AKA Hound Dog) is working for Fran Quinn on the Nationwide and had the lead after round one but couldn’t sustain the momentum. Down to 33rd after today’s eighteen.

Getting it right: The practice rule controversy concerning Michelle Wie has taken a bit of a twist The rule will be changed after next week. Instead of Friday at 5 PM it will be Sunday after 5 PM for Tournament Division members. It’s still Friday for non-members. Apparently it was written incorrectly.

No more Kool-Aide: A few players are trying to adopt the Vision 54 method of achieving their maximum potential but one devotee has thrown in the towel. After shooting a super score in the vicious conditions on Thursday, she happen to mention how pleased she was with her good round and was queried by one of the Vision coaches in the order of “What was good about it?” Kind of like a shrink getting a patient to self-analyze. But that wasn’t the kicker. She got a full eighteen hole analysis and critique (either today or yesterday) for a whopping sum of cash and decide it would have been better spent on other things.

Since I took the day off yesterday, a trip out to the course for lunch seemed appropriate. The eats in the caddie tent have been extraordinary this week and today was no exception. Salad, Spanish rice, enchiladas and chocolate swirl cheesecake was the bill of fare.

WDs: The unofficial word is that Natalie and Grace had back problems and Paula is still suffering from a stomach bug she picked up last week.

“Rescue Me” That Fontella Bass classic would have been a fitting tune for LPGA club repairman Paul Boehmer yesterday as he awaited deliverance from a stuck elevator at the Embassy Suites. On his way down to the lobby with bottle of wine in hand, his search for a cork screw was abruptly halted between the third and fourth floor. The power went out due to the gusting winds and Paul had to wait out the thirty minutes -before the doors were pried open- without a drop to drink. So close, but yet, so far.

Zingers: Speaking of Paul, a thick skin is a requirement if you wish to hang by the repair trailer, as Dina Ammaccapane found out as she passed by. She noted that she was not playing in Morelia which brought this quick response from Paul. “If you can’t spell it, you can’t play it.” OUCH!

Viva Mexico! I mentioned last week that the cervezas were flowing quite liberally at our hotel bar but by week’s end, something special was on the alcoholic agenda. Tequila, followed by alternate sips of lemon juice and home made Sangrita -a drink known as “The Mexican Flag”- was all the rage. The beer below was just the starter course. 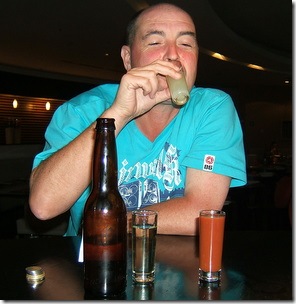 I’d like it detailed first, please: The “Looper Loop” go-kart race -held in Springfield IL during the State Farm Classic- will be kicking it up a notch this year. Besides getting a trophy and reserved parking spot in the player lot, the winning looper will receive a $100 gas card and have the use of a Mercedes Benz convertible through the weekend! If you haven’t heard, NBC, along with ESPN2, will be televising the tournament and I wonder if they’ll give us a bit of coverage? Maybe an overhead shot from the blimp.

Never made it to the course but instead, watched the coverage on The Golf Channel. The luck of the draw surely smiled on the morning groups. Looked absolutely brutal in the afternoon.

It’s party time! A .J. Eathorne had a little get-together the other day and I was one of the fortunate to take part. Burgers, dogs, chips ‘n salsa and plenty of liquid refreshment to wash it all down was the order of the evening. 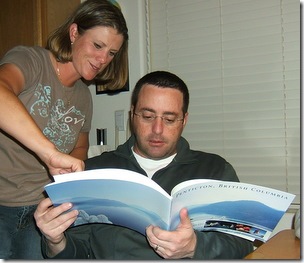 A. J. giving Dan (Tina Barrett’s hubby) a tour of her home town, Penticton BC Canada

I told them to act normal.

What’s next? The latest fad among one group of players is using baby shoes for putter covers. Guess what the caddies keep losing? 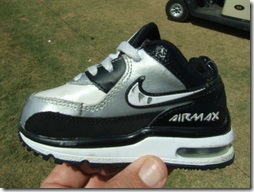 One size does not fit all.

Wow! Where do I begin? Let’s start with Mindy’s status. It did not look as if she would be totally healthy by Thursday’s opening round so she withdrew on Tuesday. That let in the first alternate Becky Lucidi. Becky teed it up in yesterday’s qualifier -not knowing Mindy withdrew- and shot the low score of even par 72. Since Mindy withdrew before the qualifier was finished, Becky’s round was washed out and the next two lowest scores qualified.

Speaking of the qualifiers, it’s my custom to enter all the scores on my site not just the two who made it. When Doug Brecht (head honcho in the rules department) sees me coming, he knows I’m after the sores but today, disappointment was all he could offer. Seems the only computer fostering the qualifier results had been infected with a nasty virus and any attempt to use that machine was futile. I decided just to enter the two who made it but was bowled over when Doug hunted me down later with all the score cards in hand! He dictated, I took notes and all the scores are now posted. Mucho kudos to Doug!!

Off with her head! That may be a bit extreme. A huge controversy was all the buzz as word that Michelle Wie arrived early last week and played practice rounds on Saturday and Sunday. Player after player thought that early practice was prohibited during the week of an ongoing event with the penalty being disqualification. But after perusing the rules, they were wrong on both counts. Part of the rule reads as follows.

Since Michelle practiced after the prohibited time, no infraction occurred and the penalty would have been a fine not a DQ.

Acapulco update: Last week I reported that the MasterCard was on its way to Acapulco next year but the latest word is that it will remain in Mexico City and an event in Acapulco will be added to the schedule. We’ll just have to wait and see.

That was nasty: As usual, there is a casualty list of players and caddies who succumbed to the ravages of “Montezuma’s Revenge” from our trip South of the boarder but one looper was hit particularly hard. He was infected with E. coli and was treated at a local VA Hospital. Doing much better now I understand.

The American way: With spring training in full swing, rental cars are as sparse as a drop of agua in the Sahara. Some were going for as much as $700 per day! At least that’s what I was told.

Now we know: There were a few inquiries last year regarding who T-Mack (Annika’s caddie) was going to loop for. The lucky gal turned out to be Momoko Ueda.

A sawbuck away: $5 is all that separated 70th place on the money list last year from the next spot down but oh, did it meant a lot. That measly amount earned Katie Futcher and place in next week’s Major and left Irene Cho sitting on the sidelines. But wait. The top thirty on this year’s list get in so Irene still has action.

Foe once, no hiccups getting back to the States. I did get in the wrong line at Immigration though. With only seven bodies in front of me, five had to finger printed and picture taken. The saving grace was being the first to get my bag and make it through Customs.

Checked into the Sleep Inn (where I left my car) just for tonight. I’ll be spending the rest of the week at my friend Kim’s place in Tempe.

Walked the back nine and found the course in better shape than I saw just twelve days ago. The greens will be the key. Hard and fast they are and getting close to the pin will be an adventure.