Drove the 600+ miles to Billings yesterday. Thousands of motorcycles along the way to Sturgis and beyond. Got off of I-90 at Whitewood and took the back road (Rte 34 through Belle Fourche) to Billings. Lonesome country but pretty.

FYI: In 1959, the U.S. Coast and Geodetic Survey officially designated a point 20 miles north of Belle Fourche as the geographic center of the United States. .

This is the first time I’ve used Airbnb. Staying at the Guest House on the Green with my gracious hosts Coreen and John. They have only been offering their abode on Airbnb for a couple weeks and it’s a great place to stay.

A fast moving storm passed through yesterday and I was invited to take in the wind and rain – a pastime of John and Coleen – on the covered back patio. Their house is on the 18th fairway of Lake Hills Golf Course and the scramble to the clubhouse from duffers unaware of the coming apocalypse was quite comical. I guess the blacking sky wasn’t enough of a clue to cut the round short. Golfers are a stubborn lot.

Even though it was not included, Coreen put out a good spread for breakfast this morning. 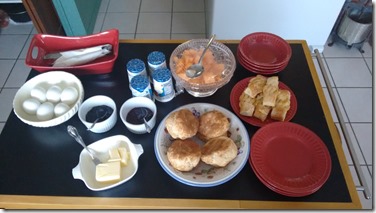 Had some great conversations regarding the “third rail” topics of religion and politics. May have rejuvenated some brain cells in the process. Heaven knows I’ve lost a bunch hanging with the caddies in Toledo and Grand Rapids. 🙂

I’ll be off to Spokane tomorrow.

Before my Sioux Falls departure, I took in a few sights which really didn’t take that long.

Walking distance from my hotel was the Washington Pavilion Museum of Arts and Sciences and a fantastic exhibit of the power of the lever was staged just outside. With just a pull of the rope, you can lift this 2,500 pound auto. 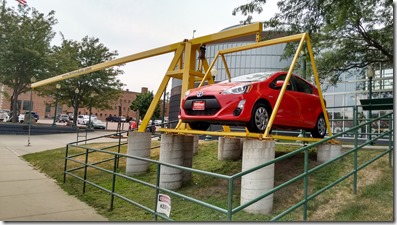 Falls Park was another stop for me. 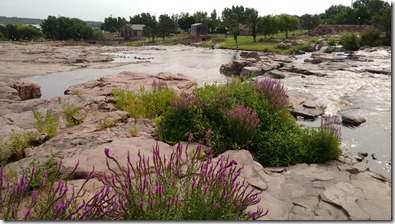 Did a fake sports agent swindle LPGA athlete out of over $200000?