I caddied for Karlin Beck. We were first off in a field of twenty-four and paired with Heather Bowie and Lorie Kane who had her old standby Danny Sharp on the bag.

Even though there was umpteen years of experience in our group, no one made it into the lucky two-spot. 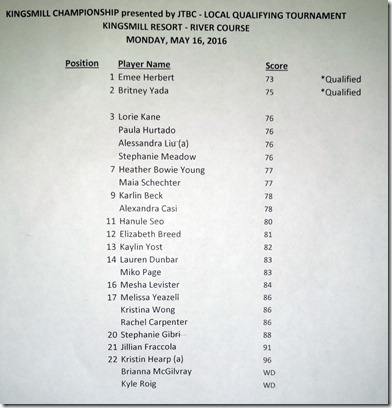 Speaking of Lorie and Danny, their picture graces the “wall of fame” in this week’s caddie area.

This weeks Caddie HQ is equipped with TV, a vast variety of snacks including multiple donut choices. Also, for the last couple of days, Chic-fil-A sandwiches. Yum!

Don Borwick (brother of caddie Tom Borwick) is volunteering this week and is stationed in Caddie HQ. I’m sure he’ll be getting an eye-opening view of what goes on behind the scenes.

The rain started early this morning and never let up. Most players played yesterday so they did get a round in. Won’t help much though as far as adapting to the conditions. The greens were hard and fast but after today’s soaking and more rain in the forecast, it’s a different ball game.