Hello, This Is Microsoft Calling

Got a call from “Chocolate Chip” yesterday for some computer advice. Seems some guy from India “representing” Microsoft called saying they’ve been monitoring his computer and it’s full of malware. Given he uses a Chromebook, it makes that nearly impossible but this scam fools people every day. Here’s how it works.

They ask you to open the event logger. There are plenty of events that show a red x next to them which is normal. But the guy says that’s proof your computer is infected and for the sum of around $300 he’ll clean it up. All he needs is permission for remote access to your computer. NEVER DO THAT! First, he has your credit card number and second, he can install anything on your computer without your knowledge.

No one monitors your computer (except the NSA) and will never call you, period.

Another thing you shouldn’t do: As told to me by another looper, the following happened in the third round last week on the thirteenth hole of the Panther Course. It’s a short par five, dogleg left, with a partially obstructed view of the fairway. There is plenty of room left you can’t see because of growth in the hazard. The player evolved snapped her tee ball left and her caddie immediately said it was in the hazard and to tee up another, so she did. You already know what happened don’t you? The original ball was playable, albeit just within the hazard line. She took a triple and fired him after the round. She missed the finals by three shots.

Lexi Thompson to play in Shark Shootout, first woman to play since 2006

How to Raise a Golfer

T&T female golfer on the verge of history

Tripled the final hole to shoot +5. Made it with ease. Modelo Especial stress relief was just what I needed afterward. 🙂

Maddie is off to hike the Grand Canyon and I made an appointment with Dr. Phil.

Scraper’s player had one birdie in 72 holes. Hard to believe.

Maker of golf balls, Acushnet, to go public next; could raise $464 million

Gained most of the ground we lost yesterday with a –1 on the Panther today.

My roommate Mike Carrick and I had identical scores the first two rounds so naturally we were paired together. Our third was Lindsey Weaver and I saw something from her on our second hole of the day I’ve never seen before.

It was the par three eleventh. Maddie hit first and it was Lindsey’s tee. She teed it up, backed off and proceeded to pull the peg out of the ground and told Ying Luo to hit instead. ???

Lindsey had her mom on the bag pushing a trolley. She found trouble on the fourteenth hole and was laying three well over the green. She pulled a club but decided to change after seeing the lie. So she called mom over and changed sticks. Took a six but didn’t notice until the eighteenth hole that the club she changed from never made it back in the bag. No worries. After a call to the officials, it was delivered on the next hole.

The wind blew and the scores went up. Ours a little more than most. Shot +4.

Yu Liu must have thought she was still at Alaqua. On one of the holes yesterday she lifted her ball on the fairway thinking it was lift, clean and place.

I attended the the player meeting yesterday and was talking to Ruixin (Rachael) Liu. She played the a Suncoast event last week and it was played ball in hand. On the first hole of the final round, a bee was under her ball and stung her in the right thumb as she lifted it and the stinger went in deep. She played the remainder with it embedded and had it removed at an urgent care facility afterward. Doesn’t think they got it all though. It still bothers her.

Rachael shot +5 today. Wonder if the sore thumb had an influence?

LPGA Commish: ‘Lucky’ Not to Have to Make Decision About Trump Bedminster

Played the front on the Panther this afternoon. Had the entire nine to ourselves.

Walked the front this morning and ran into two caddies charting the greens. They forgot to bring tees so used every piece of paraphernalia they had with them.

Plenty of one time caddies this week. One notable is Peiyn Chien (aka Money). She finished 10th on the money list and has her tour card. She’s looping for Yu Liu.

Walked the Panther Course yesterday then played the back nine with Emma Jandel with B-Funk on the bag. He also worked for her here last year.

Ran into Bully and his player, Kim Welch, while walking the back nine. I started telling caddie stories and had her rolling. Touched on Flipper, Joanne Carner, porta-potties, God’s answer on making the cut and a few other things. Forgot about our most infamous caddie doing life for a double homicide but I’ll save that for another time.

I’m staying in this VRBO condo on the fifth hole of the Bobcat Course between the fairway bunker and the green. Roommates are Scraper and Mike Carrick who are looping for Anne Lise Caudal and Ying Luo.

This could be one of my finest housing finds ever. Walking distance to the clubhouse if need be, plenty of room and all the amenities one needs. Ill be sitting on the balcony watching the stress free  play go by. 🙂

Could be one of the all time FUBAR travel fiascoes with the LPGA trying to get players and caddies to China this week. The charter flight was canceled voluntarily due to the typhoon and it’s been a nightmare ever since but I think they got it worked out. Everyone should be there by tomorrow.

So we were on the 18th green last week and I pointed to a guy sitting in a golf cart with his fluffy lapdog. This prompted a question from Maddie. “What’s the term for a guy who (inaudible) his dog?” “Bestiality?” I queried. What she said was “looks like” but I did get a chuckle from our playing partner.

+2 for our opening round. Skunked on birds. +2 second round. Missed by one. Had to get a couple cold ones afterward.

Walked around downtown Deland this morning. One of the best small towns in the country.

You never know whom you may run into during Biketoberfest.

After reading this facetious sale sign outside a collectibles store, a lady came in and asked “Where is the 569 rack?” DOH!

Played the front and called it a day.

No play was allowed till after 12 and only off the first tee. Take a number ladies.

Annika was in the house. Made some kind of presentation and took photos with Madelene Sagstrom.

My first take of my Airbnb booking in Deland thought I made a double bogey. The advertised “studio” is just a 12×15 bedroom with a fridge but it does have some pluses. Private entrance, very comphy bed, remote controlled AC and good shower. Doesn’t have a TV but I brought my own from Tampa and the OTA antenna gets plenty of channels.

There is something odd though. The AT&T internet service refuses to connect to The Drudge Report website. Keeps getting a “404 – not found” error. Must be a liberal conspiracy.

Went over and checked Louie’s hose. A tree came down buck it was off his property. His house is behind the big tree. 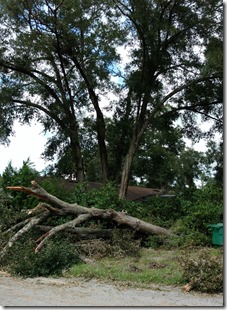 Good Move On The Move

Due to the uncertainty of of the Daytona situation, the Symetra Tour Championship will be held at Alaqua CC in Longwood. That’s the course we were supposed to play this week. No pro-am and the purse remains at $200,000.

That was the good news. The bad news is I prepaid my Airbnb reservation in Deland. May work out though. If it’s decent, I’ll book it for finals. After checking, the drive time is only ten more minutes longer. Not bad.

Maddie headed for Venice, home of 2nd Stage. She played one course yesterday and the other today. Good thinking boss.

Rick’s backyard clean up has progressed nicely. About half finished. Going to spray Roundup on the other half for a scientific comparison.

After manual labor removal, it looks pretty good. The beer afterward hit the spot even though it was 10:30 in the AM. 🙂

This is area is targeted for Roundup. 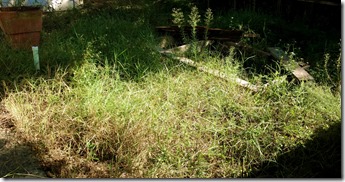 Somehow a turtle found a home in Rick’s pool (which will eventually be filled in) but the chances of him leaving was slim and none. No way could he climb out given the water level. So Rick fished the creature out with the pool skimmer and set him gently over the fence. Last seen walking down the sidewalk heading south.

After one last look at the forecast for Orlando, I decided to take up my buddy Rick’s offer to stay at his place in Tampa. I left yesterday around three but traffic was a mess and didn’t get in until dinner.

The timing was just right. I met Rick, Philly Phil and the parents of former LPGA pro Tara Fleming at Vallarta’s Mexican Restaurant for food, drink and simulating conversation. It was a perfect evening and the guacamole was spectacular.

The other break I caught was concerning my brakes. It wasn’t the master cylinder after all. The adjusters on the rear brakes were way out of whack which caused the problem. As explained to me, there is a proportional valve that sends fluid to the rear first and if not adjusted correctly, prevents the front from engaging. This is done so the car doesn’t nose dive when breaking. That’s why I had to pump them. All fixed now and working great. No cost to me. Took it back to Meineke. That’s why I use a national chain on the road.

This morning, Rick and I tackled the jungle growing in his backyard. When you live in Florida, it doesn’t take long for Mother Nature to reclaim what man has disturbed. The exponential growth overtook the landscape but we put a dent in it. Much more to go.