So I go to the course this morning and park next to a black Chrysler 300 in the caddie lot and strike up a conversation with the attendant. Nothing unusual until he points out that the Chrysler is still running and the driver is long gone. I figure it had to be a rental and the driver was unfamiliar with all the doodads and thought he shut it off.

I go to the putting green and ask if anyone was driving a black Chrysler 300 and immediately a hand went up. I told him it was still running and it turns out he and a few of his buds rented it last week and the same thing happened! That time it ran out of gas but there wasn’t much remaining anyway. This time I saved them the embarrassment.

Look who we ran into on the putting green. Former LPGA pro Leslie Spalding made an appearance to touch base with any familiar faces. Leslie is housing Perrine Delacour and Celine Herbin for the week. 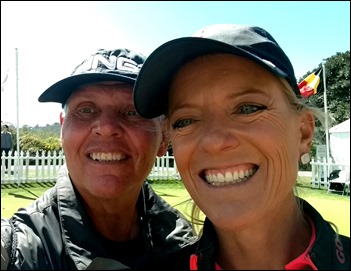 I was talking to another caddie yesterday and the conversation turned to odd things that happened in motels we’ve stayed in over the years. He came up with one in the ‘strange but true department’ that has to be on the top of everyone’s list.

He was staying at a motel in Alabama and decide to take a shower. While he was washing, the lights went out then back on again. This happened a second time, then a third. On and off in rapid succession followed so a quick exit before they went off altogether seemed prudent.

Upon pulling back the shower curtain, he was startled to find a male housekeeper holding a set of towels for his convenience! The man was of Mexican decent and did not speak English. He was also a tad “sow” as discovered after a complaint to management was lodged.

Apparently, the dirty linen was picked up earlier and had not been replaced and the overly conscientious housekeeper was determined not to let him get stuck without a towel. Not knowing how to alert the guest that he was there, flickering the light switch seemed like the thing to do.

Holy guacamole! Imagine if it was a female guest.

For what possible reason should I post a picture of this weed just outside my door? 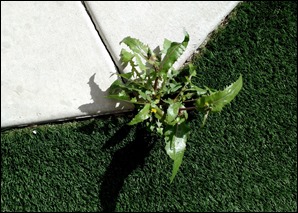