Normally, I would rest after the first hike but not this time. I did the Bump and Grind Loop Trail yesterday.

I learned last year that clockwise was the way to go. The first half is steeper with the descent downright benign. There were many on the trail that did the opposite and found the loose soil – without proper shoes – challenging. Children were guided by their watchful parents and one husband was hand-holding his spouse as she clenched a boarding boulder for dear life.

One thing that bugs me is the lack of hiking etiquette. Basically, it’s due to ignorance (I didn’t know it last year either) but the hiker going up has the right of way. Many parts of the trail are squeezed to accommodate shoulder-to-shoulder trekkers but so many people coming down don’t give it a second thought. I just move aside and say hello.

At the apex of the trail, I heard “Hey, look at that”. It was a sight not normally seen from what I was told. A large ram, graced with a pair of trophy horns stood majestically 20-30- yards up the hill. We all stood in reverence taking in his splendor. 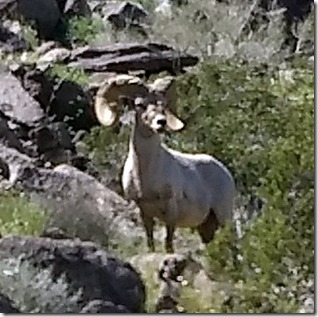 On the way from Tampa, I listened to the audiobook In Cold Blood written by Truman Capote. It’s about the murder of the Clutter family committed in 1959 in the city of Holcomb Kansas. I’ve watched the movie “Capote”, which covers the crime and drew me to the book, multiple times. Phillip Seymour Hoffman’s portrayal of Capote was brilliant.

Holcomb is only seven miles from Garden City where a Symetra event takes place. That’s another reason for my curiosity. Familiarity with the surroundings was a plus.

The next book on the agenda was Einstein: His Life and Universe. Way too much physics for me but he did live a very interesting life. You need to be a genius to understand much of it. I still have a way to go but it’s better than static or the drone of the same old music over and over.