It was a bust. No weekend play for us.

Another storm and another delay.

The final five British Open spots were filled after the completion of the second round.

Chipotle burritos that would choke a small horse were for lunch in the caddie area today. I dined with three other loopers who failed to make the cut. The rest partook during the rain delay I assume.

Jeff Steffler worked for a young Korean player – who’s’ nickname is “Five”-  at the 3rd Stage Q-School last year and even thought she didn’t make it, gave him high praise when finished.

“You’re the best caddie I ever had.” she said

“Who was your previous caddie?” Jeff asked.

Maybe it wasn’t as high as I thought.

What did the psychologist say to the naked man? “I can clearly see your nuts”. – Jeff Steffler

Over $3000 was raised for the Danielle Downey memorial scholarship fund through the sales of yardage books provided by Rick Kropf. He donated all his time and expense for charity. Bravo!

Calif. to Mt. Rushmore, in a golf cart

Just like the Open Championship at St. Andrews, rain delayed the start of the round. Ours was two and a half hours.

Walking down the ninth fairway (our final hole) we were minutes of putting this round in the books when the horn blew signaling dangerous conditions. A storm was in the vicinity and it was the prudent thing to do but at least we know where we stand.

130 yards to the pin and a shot off the cut. It’s birdie or bust tomorrow.

The food in the caddie area arrived as promised (starting Thursday). We had Chinese for lunch supplied by Magic Wok and pizza when we finished.

The LPGA has become the “no fun tour”. I’ve heard this more than once from some of the old guard caddies. Since it’s my first week back in three years, I haven’t experienced the changes that make it so but from what they describe, I can see their point.

“Coffee Joe” was in the house yesterday just to visit. Along with all the other familiar faces I’ve come across this week, it has been a memorable reunion. The only thing that would have made it better is if we were at the Corning Classic hanging out in the caddie shack.

Golf Channel’s Oberholser On Tiger Woods: ‘I Think His Best Days Are Long Behind Him …

Marathon Classic – Round One

The knees buckled on the first tee but after the calm set in, Wendy finished with a one under par round. Not bad after a three year hiatus.

Heard some grumbling regarding the food in player hospitality and the caddie area. Not the best this week.

Wicked weather expected at St. Andrews tomorrow. Should be fun to watch.

I’ve been looking for a simple pair of slippers forever. The ones at Walmart suck and anything online are too expensive. Then I walked over to Bed Bath and Beyond and found these. Just what I needed and half price to boot. I am a native Ohioan so there was a bit of trepidation buying slippers with the Michigan logo but I pulled the trigger regardless. May the ghost of Woody Hayes forgive me. Shoot, I never liked his style of football anyway. 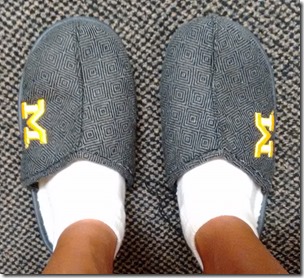 Put in a good day’s practice. Should be ready to go for our 7:48 time tomorrow.

I mentioned the reflectors at the front of every green during the practice round of which remained in place today. That was initiated by The PGA of America during the KPMG Championship. It was suggested to the LPGA and they adopted the practice. Bully for them!

I was in the caddie area this morning awaiting Wendy’s arrival when I overheard a looper, whom of which I was unfamiliar, lamenting the lack of his player’s chipping prowess. He implied that if she could only chip like us (men), she would pocket an extra $100K a year.

Rooting for A. J. Eathorne this week. She just got in the field replacing Reilley Rankin who was the next alternate.

In honor of all the Indian run motels I have stayed at lately, I changed the Google Now voice on my phone to English (India). She seems very polite and her pronunciation is impeccable.

Looping for Wendy Doolan this week.

Played 22 holes before rain (a recurring theme) put an end to our third nine.

There was a reflector on every hole indicating the front of the green. This is where the depth of the pin will be measured. Makes is easy to check the course while playing.

A morning and afternoon shotgun pro-am yesterday tied up the course all day. We practiced putting and chipping then the rain hit. I came back and walked the front nine later in the evening.

There are a few changes since I saw it last. They lengthened number three to the back of the tee; number five to a new tee far left making the hole not as severe of a dogleg right but longer; the par three eighth was lengthened; there are now two tees for number nine. The forward tee is only 240 to the front of the green making it a drivable par four. 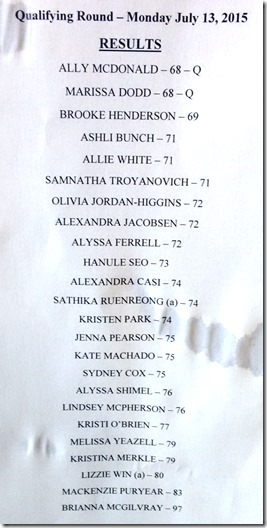 Vadala determined to save women’s pro golf in Rochester

When One Door Closes …

… another one opens. Didn’t take long to get hooked up with another bag. I’ll be working for Wendy Doolan at the Marathon Classic in Toledo. Back in “the show” at least for a week. 🙂

No wind. Very disappointing. Red is the color of the day.

Is this Tiger’s rebirth? Hit some very impressive shots.

Some fancy stick handling by Els on the first. Triple! Three whacks from less than a foot.

Boo Weekley when asked if he’s icing his hurt right wrist “Do they have ice over here, if so I haven’t found any”

The factory worker, John Singleton, shot 78. Boss said to him: “I don’t think I’ve ever wanted someone not to come back to work on Monday.”

Justin Rose’s driver was accidentally given away to his caddie’s friend. Got it back by No. 3. Rose called it a “comedic start” to the day

Facebook post from Betsy King: I’m enjoying the Marathon Classic here in Sylvania, OH July 17-20. If you are here stop by our Golf Fore Africa booth and say hello.

Back from the dead? Laura Diaz shoots nine under in the opening round in Toledo.

There’s a few names on the board you don’t usually see. Whenever an underdog wins, such as Mo did last week, it invigorates the lesser-known. A little confidence goes a long way.

On air X-rated commentary from Mark Wiebe after missing a putt. This used to be an every day occurrence for The Garb.

It’s time for Frank and Tim Tam to stop taking shots at each other. I’m imposing a 30 day cease fire. You can still comment but no personal attacks. The same goes for you ajc. Quit throwing gas on the fire.

Play nice or they’ll be no ice cream for dessert.

Hit the range today and not the one with the little round pellets. Tuning-up for the zombie apocalypse or the coming civil war. Take your pick.

After 10-year hiatus, Joan Pitcock returns to LPGA with eye on senior tour