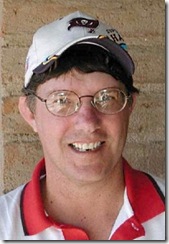 On September 4, 2008, Jeffrey Jones – AKA Shadow, Shad, Shad-rapper or just Rapper –  lost his life in an auto accident on a slippery road in Wiggins, Mississippi. He was on his way to spend some time with friends before moving on to look for a loop at the Bell Micro Classic in Mobile. Born Feb. 24, 1964, in Joliet, Illinois, Jeff joined the LPGA Tour family as a caddie at the tender age of just nineteen.

A touching memorial service was held at the course on Wednesday and we expressed our final good-byes.  I worked for Yu Ping Lin that week and she withdrew after the first round. She booked a 6:10 AM flight the next morning and I was recruited to chauffeur her to the airport which necessitated a 4 am departure. Like many times before, just thinking of such an early awakening left me sleepless. As I lay in bed, I started reviewing our tribute to Jeff. Michelle McGann gave an emotional tribute and invoked others to stand up and say something also. For what ever reason, no one did. Probably the fear of public speaking I thought. By the time I was about to depart, I knew this is what I should have said.

Dave Baker was the first permanent club repairman on tour and back then, the perks of today, for that position, were non-existent. Sometimes he barley scraped by but toiled at his job not for the money, but because he loved it and was part of the tour’s “family”. During the off season he dreaded the thought of hanging with what he referred to as “normal people” but endured it till we were all united once more the next season. When asked what it was like being part of our nomadic organization, his response was one of the best I’ve ever heard. “It’s cartoon characters coming to life” he would answer and if there was one example more apparent than “Shadow”, I can’t think of it.

“Shad” was an enigma with a combination of quirks even the most imaginative cartoonist would fail to conjure up. A predilection for a good wager – the ball cap of his favorite team always worn just slightly askew – a scratch of his head – donning a sweater on many days when everyone else was in shirtsleeves – the dead-fish handshake – a  love for sports with golf and professional wrestling (knew all the participants by

name) towards the top of the list – and lest not we forget the eclectic collection of gestures and zingers he used to describe just about any situation but usually how his round went. “Sheesh”- “Night now”- “Stagecoach comin'”  and “Shrimper” just to name a few. When asked after the pro-am how he did – referring to the amount of tips he received – it could be anything from a smile and retort of “Benjie” or forming his thumb and index finger into a shape of a donut and blowing through it, indicating he was stiffed.

A favorite euphemism “Rapper” used for the local betting establishment was “church”. Countless sojourns to “church”, with an assemblage of similar-minded compadres, would be a weekly ritual if practicable. Accompanied by the likes of “Johnny Whiteshoes”, “Glider”, “Boston Ralph”, “Skyscraper”, “Junkman” or other eccentric personas, he would go off into the night searching out a little action.

Jeffery also showed a penchant for highlighting the obvious. Many times he would visit my room, looking for his “church going” buddy Ralph, notice that I would be eating some sort of take-out for my evening repast and ask “Eatin’ dinner Larr?” He then would assume a reclining position on a vacant bed, pull out a handful of quarters and let them slide form one palm to the other as if fondling a stack full of casino chips. The incessant jingling would drive me insane! But I never did admonish his behavior. That was just a part of “Shad”.

I’m sure there are many more idiosyncrasies “Shadow” embraced that I wasn’t familiar with but come to mind of all he befriended. When the time comes, for “Shad” and I to meet once more, I’ll be greeted with “Finally get here Larr”? He’ll then reach deep down, pull out a handful of quarters and and well, you know the rest.

Tribute to Shadow by John Moody, former caddie and now editor of Springfield’s Own Magazine.

Please click on the following audio, while perusing the poignant comments from those who knew the “Rapper”.