Mark Scott received an invite from Chuck Parisi to come hiking with him. He’s in Vegas and it was a perfect time for both of us to get out of town and see some new trails.

The plan was to leave at 5am Thursday morning and as I approached the security gate to Mark’s mobile home park, I was greeted by a guy yelling, “Are you following me? Are you following me?” Luckily, the car behind opened the gate before I had to punch in the code, or there might have been a confrontation.

I decided to take an unfamiliar route to Vegas through the Mojave National Preserve. After passing through Twenty Nine Palms, it was a desolate drive. A real eye-opener, but we’re both glad we did.

Day one: Chuck took us on the Lone Mountain Loop Trail (a bunny slope) then we added some severity. It was a good workout.  Of course, he had to stop for a call along the way. 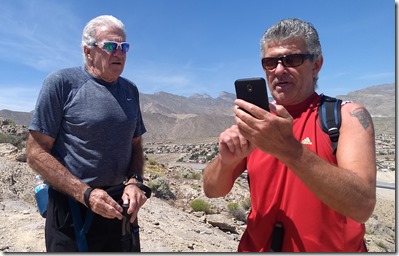 We ate at Dirt Dog for lunch. Chuck abstained and Mark got my dog and me his. They were both excellent none the less.

Chuck called Dan cannon (aka “Book ‘em Danno” from Hawaii Five-O) It was great hearing his voiced and we all reminisced about caddie days past.

Steaks were on the dinner menu for me and Mark. Chuck had chicken burgers. We sat around the dinner table telling caddie stories afterward. It was a laugh a minute.

Day two: We hiked the five-mile Buckskin Cliff Shadows Trail early in the morning. The boys were pooped afterward, but I was only getting warmed up. 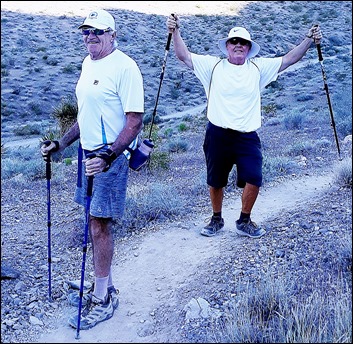 For dinner, Chuck whipped up some pasta topped with his mom’s spaghetti sauce. Perfect! Be honest, you thought this was Patty Sheehan at first glance. 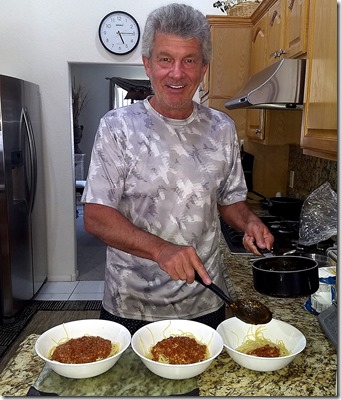 Later, he took us on a tour of The Strip. What a ghost town. It has been taken over by bicyclists and skateboarders. 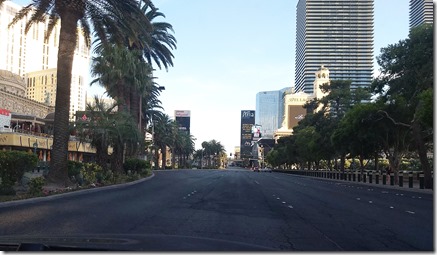 Day three: Hiked part of the Flagpole Loop Trail. After a miscue at the start, we found the correct path. It was the best so far. 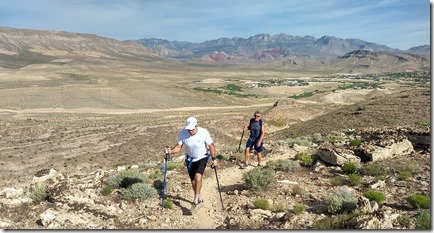 Well worth the climb. This is the photo Chuck wants on his tombstone.

All smiles before the pain sets in. 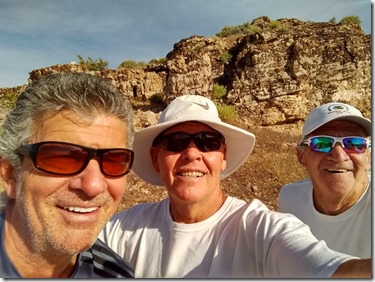 Vegas salons are opening by appointment only and Chuck got on the list for 3pm. Good thing too.

Day four: Heading home this morning. It was a fantastic stay. Great hiking and hilarious tour tales. Hope to do it again.

This entry was posted on Sunday, May 10th, 2020 at 7:01 am and is filed under Uncategorized. You can follow any responses to this entry through the RSS 2.0 feed. You can leave a response, or trackback from your own site.